Week Recap: Breaking down the first week of the 2021-22 season 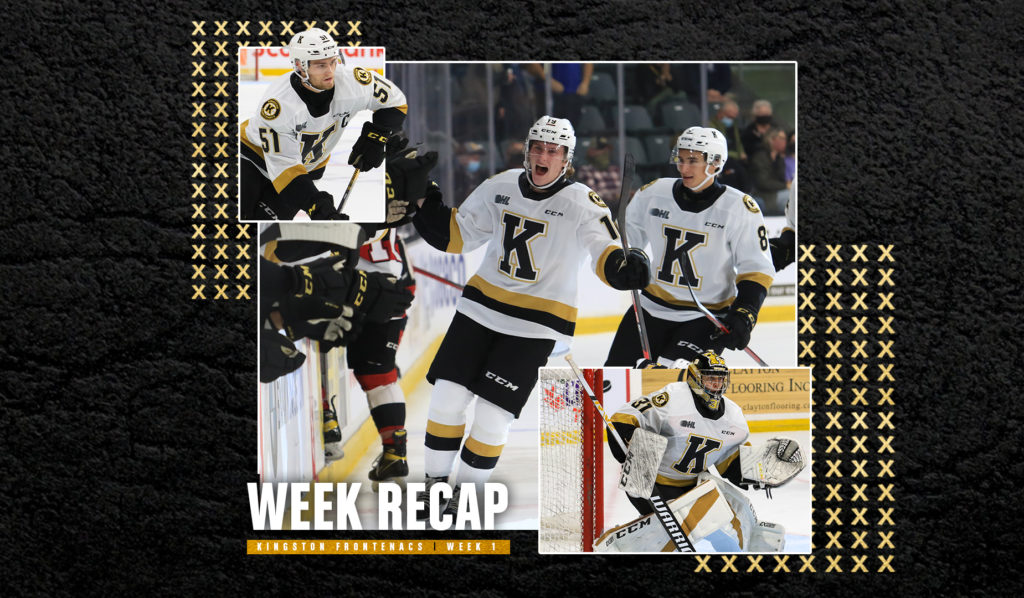 The Kingston Frontenacs wrapped up a busy weekend playing three games in consecutive days to open their 2021/22 Ontario Hockey League season. It was an 8-1 win versus the Ottawa 67’s on Friday night at Leon’s Centre before a 7-2 loss at home the next night to the Mississauga Steelheads. After two high-scoring affairs, the team fell 3-2 in their first road trip of the year in a rematch of the opening night, taking on the 67’s in Ottawa.

As is the case at the start of a new season and primarily due to the lengthy time since the OHL last played games, many players made their Frontenacs debut over the weekend. This gave fans a chance to finally see some of the new prospects. It was also an opportunity to welcome back veterans, as it was the first time in over 18 months to see them hit the ice in Kingston uniform as they began their quest for an OHL and Memorial Cup run.

General Manager, Kory Cooper and recently named Head Coach Luca Caputi (Associate Coach with Kingston in 2018-20) earned their first career wins in The Limestone City.  Twelve new player name-bars were on the back of the freshly unveiled and upgraded Black and Gold uniforms for the management staff to employ.

Former Kingston and OHL legendary coach and manager, Larry “Mav” Mavety was honoured before opening night at Leon’s Centre. The Frontenacs held a 39-second-long moment of silence, a memorial to the years he had spent in the OHL. The Frontenacs will be hosting Larry Mavety Night on November 13, 2021, at 3:00pm against the Mississauga Steelheads. This game will honour the legacy that Mav has left behind for the sport of hockey.

The team announced the leadership group before the opening game on Friday versus the Ottawa 67’s, naming former 2019/20 Assistant Captain Shane Wright the captain for this upcoming season. 2019-20 returning players Lucas Peric, Jordan Frasca and Jake Murray will share the assistant captain role.

Newcomer Lucas Edmonds rounds out the assistants’ group that is set to guide a team with high expectations. “I think the most significant part for me is I’ve been that young guy before. I know what they are going through. We have a good bond on this team, so we should do some great things this year,” said Edmonds.

2021 Canadian Hockey League Import selection Leevi Meriläinen earned his first win in the Kingston net on Friday, October 8 in the 8-1 win over Ottawa. The Finnish native made his OHL and North American debut after spending time with the Ottawa Senators at their training camp. He signed with the NHL team over the summer.

Rookie netminder Aidan Spooner made his OHL debut on Saturday, October 9 after being inserted into the crease against Mississauga. The Maple, Ontario native staved off 11 of 13 shots in his first look at OHL shooters in the regular season play.

We Are On The Board

Ludwinski was excited for his chance to help his team open the season in front of fans for the first time in regular season play. After being sprung on a breakaway by Shane Wright versus Ottawa on Friday, Kingston’s 2020 first-round selection scored his first OHL goal past St. Louis Blues prospect Will Cranley.

“I had a breakaway and kind of struggling to stay up on my feet a bit,” said the rookie forward after the game. “I was nervous going down as I was thinking about what I wanted to do. It was a memorable moment forever.” Ludwinski also commented on the group adding, “I think we played great as a team. Everyone was going today. We were strong in the d-zone, o-zone and on PK and PP.” Playing in his first regular season OHL game, the 5-foot-11, 162-pound forward was excited to get in front of home fans adding, “Finally, being here is a dream come true.”

Wright was thrilled for his teammate. The captain commented on the play, saying, “I wanted to hit him with a stretch pass, missed him a little bit. We got lucky it bounced over the d-man’s stick and Paul was able to break in and finish the play. It was great for him to get that first goal.”

After playing most of his rookie season lined up with Philadelphia Flyers prospect Zayde Wisdom (currently injured), Wright sees many traits in his new linemates’ game. “I feel like they are similar players. They both work hard every shift, get to the dirty areas, go to the net and win battles. They can also score. Both are intelligent players who can shot. I feel like they are similar players, and I love playing with either of them.”

The Donning of a New-Era

In the season opener versus the Ottawa 67’s, players donned the new jersey previously introduced to fans on social media. Lucas Edmonds would register four points, including his first two OHL goals in the 8-1 routing of the 67’s. Rookie Paul Hughes also tallied his first career goal joining Ludwinski and Edmonds. Meriläinen stopped 14 of 15 shots earning his first career victory in an OHL crease.

On Saturday, the Fronts played host to the Mississauga Steelheads in the tough 7-2 loss. The Steelheads, playing fresh in their first game of the season, won the special teams significantly. With a 34% efficiency rate throughout the pre-season and going two for six in the home-opening win, the Frontenacs power play expects to be a strength for Head Coach, Luca Caputi’s team.

Going 0-7 with the man-advantage was a key to the loss on Saturday. Included was a five-minute-major penalty to the visitors early in the game, which Kingston did not take advantage of—combining that with having two goals against while on the penalty-kill makes for a difficult task to overcome.

Kingston would control most of the play after being outshot by a two-to-one margin in the first period, including outshooting the Steelheads 28-15 over the last two periods of the 7-2 loss. Two late goals by returnees Francesco Arcuri and Maddox Callens showed resilience in a team that did not quit when being down by such a large margin before the game was three periods old.

Arcuri’s tally was his second in consecutive nights. The Dallas Stars draft pick returned to the ice after a hit he took just four seconds into the game. Maddox Callens scored his first to round out home scoring.

In contrast to the first two games, the Frontenacs found themselves in a much closer affair in Ottawa on Sunday afternoon, heading back home with a close loss. After playing host to Ottawa for Friday’s home-opener, Kingston found themselves returning the favour as they would play visitor for the 67’s home-opener at TD Place in Ottawa.

The teams traded four goals in the first period, but an early 67’s goal in the third would hold up for the home squad’s 3-2 victory. Martin Chromiak had a pair of assists with Wright’s second and Edmonds’ third goal making the scorers sheet. Ludwinski also assisted for his fourth point and is tied for the OHL rooking point lead with Callum Ritchie of Oshawa Generals.

Kingston plays their next game on Friday, October 15th,  at Leon’s Centre. The Central Division Sudbury Wolves come to town for the first of two visits to Leon’s Centre. The team will celebrate Frontline Workers for their tireless efforts during the pandemic.

The Fronts will be back on the road on Saturday, October 16th for a matchup in Peterborough to take on the Petes for the first time this season. Game time is set for 7:05 PM at the Peterborough Memorial Centre.

Listen to all the action on 104.3 Fresh Radio with Frontenacs play-by-play voice Jim Gilchrist. Fans can also follow along with team social media channels on Twitter, Facebook and IG for updates.

All home game tickets can be purchased at www.ticketmaster.ca or at the venue box office. Group tickets and flex packs are also available for fans at www.kingstonfrontenacs.com.