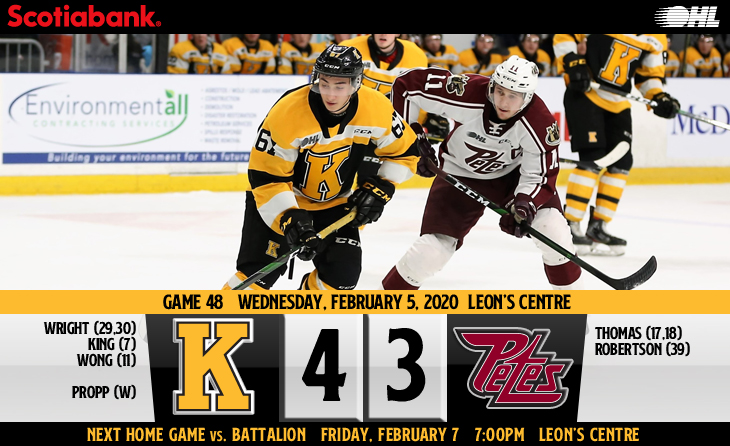 The Frontenacs welcomed the Peterborough Petes to town on Wednesday night hoping to even the season series with their long-time rival. It was also an opportunity to close the gap to within three points on the Niagara IceDogs who had lost on Tuesday night to the London Knights.

The Petes hit the scoreboard first when Akil Thomas tipped a point shot that was taken by Hudson Wilson. Peterborough took the early 1-0 lead.

Shane Wright quickly evened the game for the Frontenacs. He came streaking into the zone on his off wing and fit the puck through the smallest hole left by Hunter Jones to tie the game 1-1.

The Frontenacs kept coming and Nick King put them ahead with a slap shot from the point. The rocket shot beat Jones cleanly. It was the second straight game with a goal for the overage defenceman giving him 7 on the year.

Wright would extend the lead further before the period ended. He appeared to lose the face-off in the offensive zone but swung at the loose puck and beat Jones who likely wasn’t prepared for a quick shot. It gave Shane a multi-goal game for the sixth time this season and gave the Frontenacs a 3-1 lead.

The second period was less eventful as far as offence goes, but Christian Propp made goaltending as exciting as it can be. The Petes opened the period with 16 straight shots and Propp stopped each of them. He was the reason the Frontenacs held on to their 3-1 lead after 40 minutes.

The Petes continued to push in the third period and their persistence paid off. Nick Robertson cut the lead in half with a quick snapshot to the glove side of Propp. It was Robertson’s 39th goal of the season.

Akil Thomas tied the game after an unfortunate turnover. Christian Propp misplayed the puck and the Petes took possession. Propp made a great save on Zach Gallant but Thomas was able to poke in the rebound. It was one of the few errors that Propp made on an otherwise spectacular night.

The Frontenacs rewarded their goaltender with a bounce back goal. Vitali Pinchuk created an offensive zone turnover and Dustin Hutton made a great pass to Nick Wong who placed the puck perfectly over the pad and under the glove of Jones. It put Kingston back in front with a 4-3 lead.

This time the Frontenacs would hold onto the lead for the final four minutes and earn an important two points while evening the season series against the Petes.

The two points brings Kingston within three points of the Niagara IceDogs for the final playoff spot in the Eastern Conference. They still hold a game in hand over the IceDogs who have lost six straight games.

The Frontenacs will take their two-game win streak into a Friday night game against the North Bay Battalion. Game time at Leon’s Centre is 7 PM. They will then host the Mississauga Steelheads on Sunday afternoon at 2 PM. Tickets for both games are available at ticketmaster.ca.

Shop Now at The Fronts Shop
4 days ago