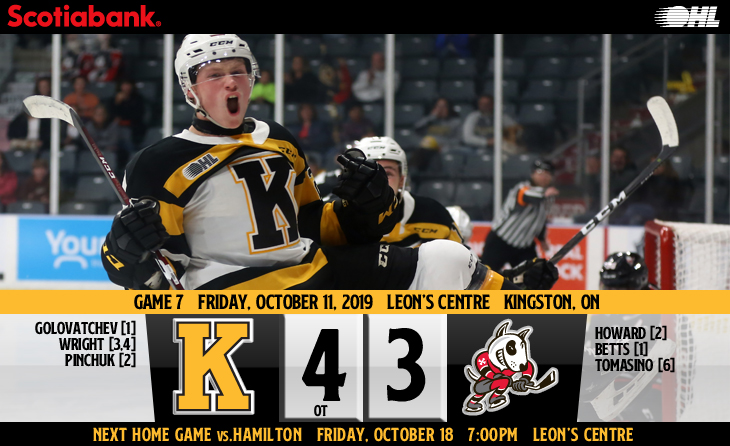 One week ago, the Kingston Frontenacs and the Niagara IceDogs met in a track meet in St. Catharines. It was the IceDogs riding a five goal first period to an 8-4 victory over the Frontenacs. The power play was to thank for a big win by the home team. Kingston was only able to kill off 3 of their 7 minor penalties which, in the end, was the difference in the game. One week later, the Frontenacs were looking to even the series on their home ice at Leon’s Centre.

Kingston had their best opening period of the season, by far. Dennis Golovatchev got his team fired up early when he slid home a rebound just over a minute into the game for a 1-0 Kingston lead. It was the first time Kingston had led on home ice in the young season. That lead didn’t last for very long. Mason Howard scored on an IceDogs power play to tie the game exactly six minutes later. Kingston grabbed the lead back when Shane Wright scored his first goal at Leon’s Centre and it was a near replay of the Golovatchev goal that opened the scoring. Again, the IceDogs bounced back and tied the game a few minutes later. This time it was Dakota Betts who jammed at a loose puck beside the net and snuck it by the pad of Brendan Bonello. The entertaining first period ended in a 2-2 tie but the Frontenacs held an 18-9 advantage on the shot clock.

Kingston earned the lead back midway through the second period. Billy Constantinou sent a wrist shot towards the net from the point. The puck changed direction off the stick of Vitali Pinchuk and beat Tucker Tynan to make it 3-2 Frontenacs. The most dangerous player on the IceDogs roster answered back for Niagara. Philip Tomasino beat Bonello to the glove side with a powerful wrist shot to make it 3-3. For the second straight period the teams went to the locker room involved in a tie game.

The third period belonged to the Kingston Frontenacs. They outshot Niagara 19-5 but Tucker Tynan made every save in an unbelievable period by the young goaltender. He single handedly held his team in the game and earned them a single point by getting them to overtime.

He couldn’t make every save in overtime, however. When Akil Thomas went to the box for slashing, it sent the Frontenacs to a power play. With the extra space created by the 4-on-3 power play allowed them to move the puck around until Shane Wright was given too much space. He made a perfect shot to beat Tucker Tynan and give the Frontenacs their first win of the season.

Shane Wright scored his team leading third and fourth goals of the season giving him a total of six points. Zayde Wisdom moved into second on team scoring with two assists. Brendan Bonello made 21 saves for the victory.

The Frontenacs are right back on the road tomorrow night to face the Barrie Colts. They make a Monday afternoon stop in Ottawa for a Thanksgiving Day matinee before returning home next Friday night to host the Hamilton Bulldogs. Tickets for that game are still available at Leon’s Centre box office or online at ticketmaster.ca.