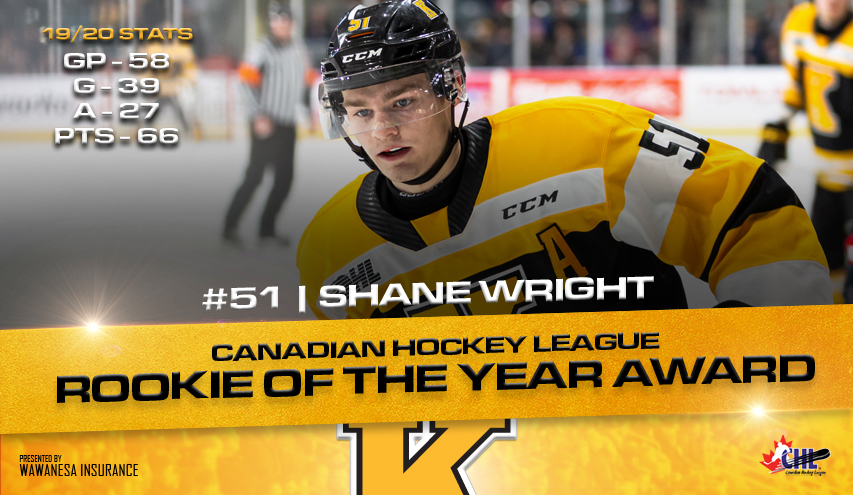 Kingston Frontenacs rising star, Shane Wright was awarded the CHL Rookie of the Year Award presented by Wawanesa Insurance on Friday, June 5, 2020. Shane was up against Dylan Guenther (Edmonton Oil Kings, WHL) and Zachary Bolduc (Rimouski Oceanic, QMJHL) for the award. Wright, Guenther, and Bolduc had each won the Rookie of the Year honour in their respective leagues (OHL, WHL, and QMJHL) to be nominated for the CHL award.

“The Kingston Frontenacs are tremendously proud of Shane and his latest accomplishment,” said Frontenacs General Manager Darren Keily. “To win the prestigious award speaks volumes of his character, talent, and dedication to the game he loves.”

Shane put up outstanding numbers in Kingston during his rookie season by scoring 39 goals and adding 27 assists for 66 points. Shane entered the 2019-20 season as an exceptional status player and he lived up to all the expectations that came with the label. For a player that didn’t turn 16 years old until January 5, 2020, he led the entire CHL in rookie scoring. Shane becomes just the second exceptional status player to win the CHL Rookie of the Year Award. John Tavares accomplished the same feat during the 2005-06 season while playing for the Oshawa Generals.