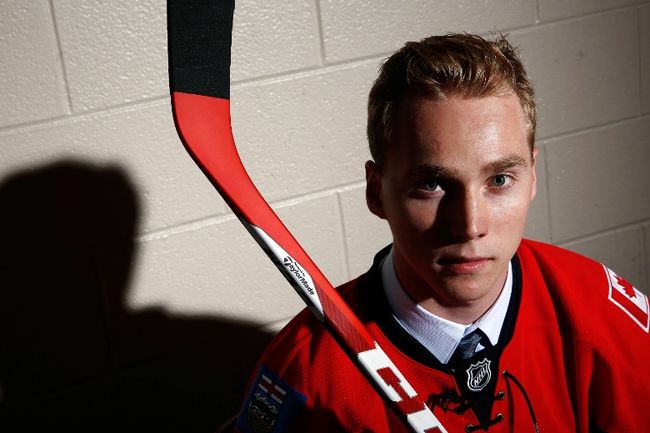 By Nick Faris, the Kingston Whig-Standard

In the stands of Philadelphia’s Wells Fargo Centre, the minutes felt like hours to Sam Bennett.

In reality, the Kingston Frontenacs centre didn’t have long to wait at all. One week after his 18th birthday, Bennett celebrated a corresponding milestone: the Calgary Flames picked him fourth overall in Friday’s NHL entry draft.

The draft is an annual rite of passage for hockey’s most promising prospects, and this year, Bennett was among the very best. NHL Central Scouting tabbed him as the top eligible North American skater, ahead of Barrie Colts blueliner Aaron Ekblad, who went first overall to the Florida Panthers.

As such, going fourth could be viewed as a veritable slip, but Bennett doesn’t see it that way.

Quite the opposite, in fact: hearing his name called by Calgary was a dream several days in the making.

“I visited Calgary a week before the draft,” Bennett said, “and after visiting them and coming home, I went to my parents and I told them, ‘I want to play for Calgary one day.’ For that to happen, it really is a dream come true.”

Before Flames general manager Brad Treliving took the draft stage on Friday, Bennett said, he didn’t know what team would take him.

It could have been the Buffalo Sabres or the Edmonton Oilers, teams starved for offensive talent, with the second and third picks, respectively. In the end, both opted for other young centres: Sam Reinhart and Leon Draisaitl, both hailing from the Western Hockey League.

“I couldn’t even put it into words,” he said. “Once my name was called, it was relief, it was excitement, it was so many emotions. It was hard to just pinpoint it.”

Treliving and Flames president Brian Burke endorsed Bennett as a premier prospect at the draft, but that won’t guarantee the centre a spot on Calgary’s roster come October.

Bennett said he met with Flames brass twice prior to the draft, and their conversations since have held the same tenor: come to training camp in the fall and be ready to turn heads.

“The goal is to make the NHL next year,” Bennett said.

He’ll be back in Kingston if he doesn’t, and Bennett’s career progression aside, it’d be hard to blame his junior team for praying for a one-year layover.

As the Frontenacs’ third-youngest player in 2013-14, Bennett led the club in goals and assists, racking up 91 points in 57 games. (Though young and somewhat slight of frame, he doesn’t back down from most opponents; spending 118 minutes in the penalty box attests to that.)

Bennett is billed as a complete player: dangerous offensively and responsible in his own end, possibly in the direct mold of his current boss. Frontenacs GM Doug Gilmour played 20 seasons in the NHL and spent a fifth of that time in Calgary, hoisting a Stanley Cup with the Flames in 1989.

It’s a tad early to compare the two, but Gilmour’s influence — and that of the Frontenacs as a whole — has boosted Bennett through his playing days so far.

“The whole Kingston organization has been unbelievable,” he said. “I wouldn’t be this far in my career without them, that’s for sure.”