FRONTS BEAT WHALERS 6-4 AT PINK IN THE RINK

2014 pink in the rink plymouth 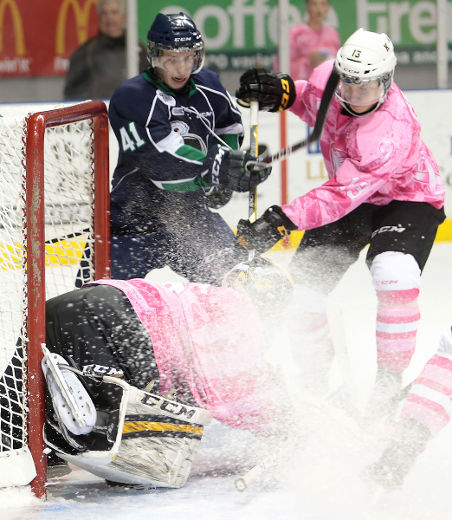 On Pink in the Rink night the Kingston Frontenacs finally turned the red light on behind the visiting goaltender for their best scoring output of the season.

The Frontenacs, after four home games in which they scored just seven times, found the range against the Plymouth Whalers for a 6-4 win before 4,361 fans at the Rogers K-Rock Centre.

The Frontenacs scored two goals in each period and never trailed as they won for the third time in five home games.

Fitting, too, that on the third-period shorthanded goal by Conor McGlynn that halted the Whalers once and for all at 14:53, goaltender Lucas Peressini drew an assist on the goal.

Peressini had been assisting his club all game with a 32-save performance. His second-period save on Will Bitten when it was a one-goal game was a highlight stop.

“It is good to see us get six on the board, to see the guys come together. We have a strong forward group. It was only a matter of time,” Peressini said.

“I was really happy with our effort tonight overall. The guys did a much better job of being hungry around the net and we got rewarded for it,” said head coach Paul McFarland.

“It’s great to see guys working so hard for us on a daily basis and not to get rewarded by scoring goals is tough to watch. They really deserved it. I’m happy for the players.”

Both teams scored twice on the power play and it was Peressini’s stop on Bitten in the second period on a Plymouth extra-man advantage that was a key save. The Frontenacs were up 3-2 at the time.

“It’s good to make a big save for the team. It gets everyone excited,” Peressini said.

“It gives them confidence that I am going to stop the puck when I need to.”

The Whalers ran a little back-door play on the power play and Peressini was expecting it.

“I was kind of ready for it. We went over their power play before the game.”

“Lucas was great all game. To be honest, he has been great all year for us,” McFarland said.

“When you are playing good defensively you are going to give up the odd chance. It’s not always easy as a goalie to make that big save when it comes. He’s been doing a great job for us.”

It was easily the roughest first period of the early Ontario Hockey League season at the Rogers K-Rock Centre. Plymouth’s Mitch Jones started it when he took a run at Ted Nichol along the boards by the penalty box. Jones elbow struck Nichol on the head and Nichol went down. Rookie defenceman Reagan O’Grady responded by going at Jones. At the same time, Kingston’s Ryan Verbeek and Liam Dunda squared off. Verbeek, who has a quick left delivery, left Dunda dazed with several punches to the jaw area.