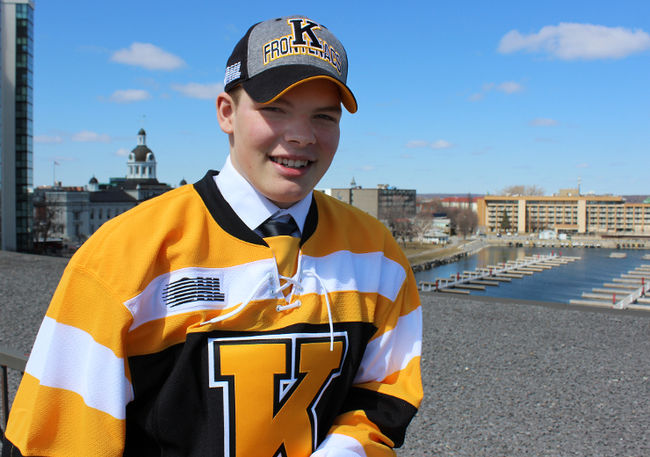 Starting with first pick Robbie Burt, a 193-pound right-winger who stands just a shade under six feet, there was little doubt getting bigger was on the Frontenacs’ agenda at Saturday’s roster beef-up day.

All people needed to know about Burt was the central scouting report on the Mississauga Rebels forward that labelled the Hillsburg, Ont., native as “a tank on skates.”

“He’s a big body. He will be a power forward in the league. We’re very excited to have him,” Gilmour said.

The feeling was mutual for the 15-year-old Burt, who had 26 goals, 53 points and 93 penalty minutes for the Rebels.

He was at home with family and friends, gathered around watching the draft via the Internet when his name was called out by Gilmour.

“Amazing. A dream come true,” said Burt, adding that GM Gilmour is someone he looked up to.

“If I was to write the script to the draft, it would be exactly the way it went. Ending up in Kingston is like the best spot I could have been,” he said.

Burt said he had some predraft discussions with Jeff McKercher, Kingston’s head scout, but of course nothing was definite due to the Frontenacs’ draft position of 11th in the first round.

The first eight selections of the day were forwards. Once Sarnia selected centre Sasha Chmelevski from Detroit Honeybaked, the Frontenacs wasted no time calling out Burt’s name.

“He plays a north-south game, has a lot of skill and scores goals. He’s also very powerful and loves to play physical. We’re happy to get him, for sure,” McKercher said.

“We identified him early on. We’re thrilled to get him.”

Burt, who is indeed thick through the shoulders and just a half-inch shy of six feet, laughed about the scouts reporting he was a tank on skates.

“I’m a guy who likes the big, physical part of the game. Taking guys out, rubbing them into the wall. It’s what I live for,” Burt said.

“I am not scared to go into the corners against anybody.”

The Frontenacs selected Paquette and Brahaney six draft spots apart. Paquette is from Ottawa and played for the Jr. 67’s. McKercher said Paquette brings a little bit of everything to his position and the style he skates is similar to Sean Day, the exceptional player draft in 2013.

“He moves the puck very well. He plays the power play and he’s got a bomb of a shot,” McKercher said.