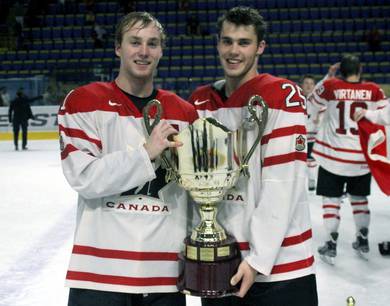 Hockey Canada, in partnership with the Canadian Hockey League, announced Monday a roster of 41 CHL players that have been invited to Canada’s National Junior Team Sport Chek summer development camp, set for Aug. 3-8 in Brossard, Montreal and Sherbrooke, Que.

Jankowski will continue to monitor these players and other potential candidates during the first few months of the 2014-15 season and at the CHL Subway Super Series to determine who will be invited to Canada’s National Junior Team selection camp in December. In total, 22 players will be selected to represent Canada at the 2015 IIHF World Junior Championship, Dec. 26, 2014 to Jan. 5, 2014 in Montreal, Que. and Toronto, Ont.

“I would like to congratulate the players selected today to attend the development camp,” said Jankowski. “This is a first step towards being chosen to represent Canada at the world juniors, but these 41 players have the first opportunity to show the coaching staff how they can help Canada succeed in Toronto and Montreal at Christmas-time.”

Canada’s National Junior Team development camp attendees will gather in Brossard at the Montreal Canadiens’ practice facility for practices on Aug. 3 and 4 before playing the national junior teams of the Czech Republic and Russia.

A number of the players on the summer development camp roster will be front and centre at the 2014 NHL Entry Draft on June 27-28 in Philadelphia, where many are expected to be selected in the first and second rounds.