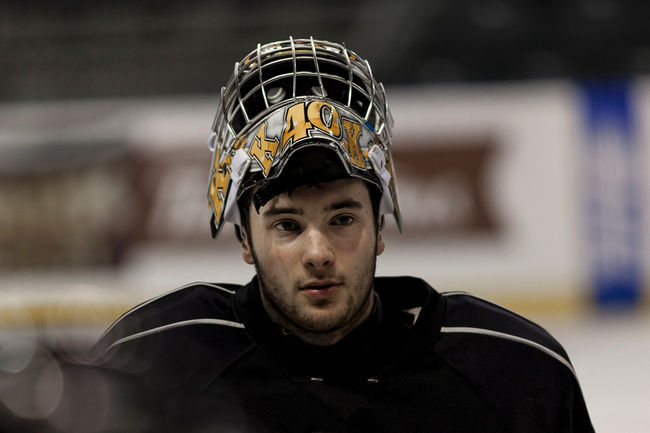 The Kingston Frontenacs know it.

The Ontario Hockey League acknowledged it.

Goaltender Lucas Peressini had himself a pretty special season.

The 20-year-old from Nobleton was hands down the most valuable performer for the Frontenacs.

The OHL agreed, too. The league made Peressini the all-star goaltender and the puck stopper who will vie for Canadian Hockey League goaltender-of-the-year honours.

Now Peressini, undrafted by the NHL after his rookie season in 2013-14, is anxious to see how his terrific sophomore season for the Frontenacs translates at the NHL Entry Draft, June 26 and 27 at the BB&T Center in Sunrise, Fla.

Peressini’s agent, Jeff Jackson of the Bobby Orr Group, is telling Peressini his standout numbers — a league-high 3,413 minutes played, five shutouts, a 2.32 goals-against average and 1,564 saves, which equated to a .922 save percentage — have NHL teams looking his way.

“He said there is definitely some interest (and) he expects I’ll get drafted,” Peressini said.

“Obviously on draft day anything can happen. So you don’t know, but it looks good.”

Even without being drafted, Peressini will no doubt draw free agent attention. He went to the Detroit Red Wings camp last August and worked his way from the rookie camp to the main camp.

“It is kind of a waiting game right now. I won’t find out where I am going until after the draft,” Peressini said.

The Red Wings haven’t forgotten about Peressini after his showing at their camp.

“Detroit actually called me during the year just to check up on things,” Peressini said.

“I am not too sure of what the extent of the interest is with them, (but) I think they are still pretty interested.”

Peressini also has an overage position with the Frontenacs to fall back on.

The six-foot-two, 188-pound Peressini was recognized in the OHL’s Eastern Conference coaches poll as the second most improved player in the league. He was the best shootout goalie, tying for a league-high five wins by shootout. He allowed just six goals on 30 attempts.