WATSON CLOSES IN ON MILESTONE 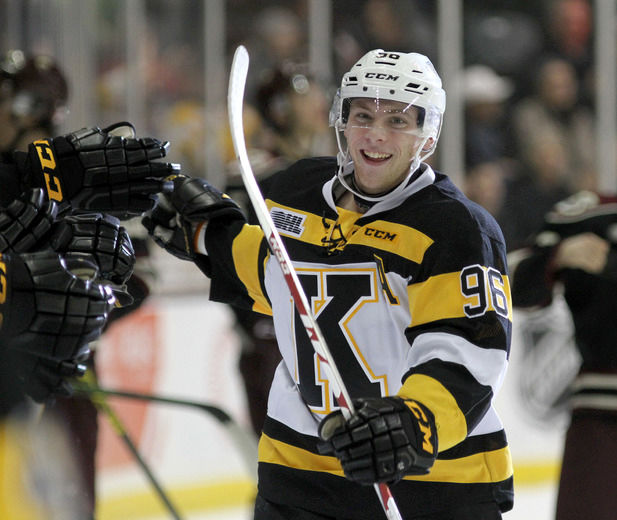 Spencer Watson is positioned to become the first player for the Kingston Frontenacs to reach the 100-goal career mark since Nathan Moon in 2010.

In an Ontario Hockey League season in which he has already passed the 200-point career mark, the 19-year-old Watson heads into Friday’s game against the Owen Sound Attack with 23 goals for the season and 99 in his four-year career.

“It’s really special. Another big milestone relates to how you play on the ice,” said Watson about the prospect of reaching 100 goals.

“I’m excited to maybe get that locked up this weekend and have a little bit of fun with it.”

Teammate Michael Dal Colle can relate to the achievement of reaching the 100-goal mark in an OHL career.

Dal Colle had 104 goals with the Oshawa Generals prior to the trade that brought him to Kingston.

“The 100th is a big milestone. I got it in Saginaw and I got the puck,” Dal Colle said.

“It’s a great achievement. Obviously he is going to get it. Hopefully against Owen Sound. I’m going to do the best I can to hopefully give it to him.”

Dal Colle said he admired Watson as an opposing player and appreciates him even more as a linemate. Dal Colle has scored 10 goals in 10 games with Kingston and Watson has had a hand in most of them.

“His passing is an underrated trait. Obviously he can score lots of goals and he’s more of a shooter,” Dal Colle said.

“When the pass is there he can definitely deliver. I’ve been on the receiving end quite a few times and hopefully there is more to come.”

Watson leads the Frontenacs with 51 points in 44 games. He has 28 assists and 111 over his career.

“I feel like my goal-scoring ability has kind of overshadowed that a little bit,” Watson said.

“I’ve always had great hockey sense (and) been able to see people. Playing with DC (Dal Colle) and (Warren) Foegele, they are special players. It is easy to find them because they find that open area.”

Watson, who leads the OHL with 230 shots, said playing with Dal Colle keeps opposing teams guessing as to who is going to shoot.