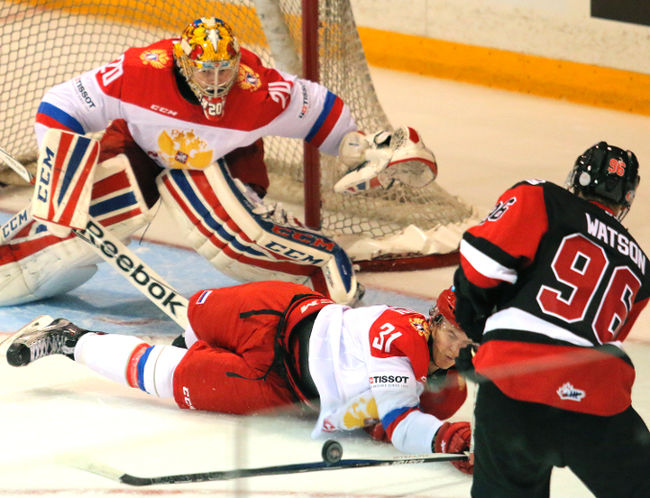 KINGSTON — The Kingston Frontenacs gifted trio of Lawson Crouse, Spencer Watson and Roland McKeown have left the puck in Hockey Canada’s court in regards to who gets the call to the final Canadian junior team selection camp.

McKeown and Watson are pushing to make the team while Crouse already has a returning spot, given he was on the gold medal-winning Canadian team last year.

Watson and McKeown were front and centre in Team OHL’s two-game sweep over Russia in the Canadian Hockey League’s challenge series.

The 19-year-old London, Ont., native had three goals and an assist in the OHL’s two games. The four points are the most since Ryan Spooner, another ex-Frontenac, set the record with six points.

The three Frontenacs played in both games, starting with a 3-0 victory in Owen Sound last Thursday.

“All of Hockey Canada is watching. That’s kind of why I was there. They wanted to evaluate me for the world junior,” Watson said.

Watson said playing in the challenge series in one game last year —when it was held in Kingston — helped him prepare for playing the two games this time around.

“My game has improved from last year. I wast able to bring it to the ice for these two games and be a big contributor,” Watson said.

“It was exciting. Those two games show a lot of where I am at right now,” added Watson, a 2014 NHL draft pick of the Los Angeles Kings.